JP Morgan ( this time) Caught Stealing from Detroit, the Rest of Michigan, and California.


Yep,  The infamous JP Morgan gets caught again stealing from the American public and why shouldn't they continue to steal?

Bankrupting America isn't treason. But being a whistle blower is.


If President Barack Obama went after "banks" like JP Morgan like he went after Bradley Manning, then our economy would be growing as oppose to an economy that's lucrative only to Corporate America, and to America's top two percent.

This time JP Morgan was found guilty of purposely manipulating energy markets in California, and in one of America's poorest states, Michigan.

That's right, Bankrupt Detroit being over charged on electricity by a Bank that America bailed out, after robbing America.

JP Morgan's Capo behind this robbery is an "influential leader of the banks commodities business",  Blythe Masters, who then lied about it to federal authorities.  Blythe Masters, is a known international financial criminal, who was behind the modern credit default swap of the famed 2008 financial meltdown, earning her the distinction of being labeled by London's Guardian News Paper, as "the woman who invented financial weapons of mass destruction".

Earlier this year, After Blythe and her crew were caught in yet another brazen public heist, JP Morgan was warned that the government would go after them personally if they got caught stealing again. But this crime family is headed by Jamie Dimon a close friend and advisor to the President.

Is it any wonder why the government decided not to go after Blyth and her crew for energy market manipulation, obstruction of justice, and perjury,and then struck the criminal acts from the final report?

In the end JP Morgan was fined 410 Million which for this global crime family is akin to a parking ticket, so much so that JP Morgan Spokesman Brian Marchiony stated in a public gloat

“We are pleased to put this matter behind us,” said Brian Marchiony, a spokesman for JP Morgan. “Due to reserves previously set aside, this settlement will not have a material impact on earnings.”

Translation? It's only a matter of time before  JP Morgan's hands in our pockets, again, until we've finally had enough. 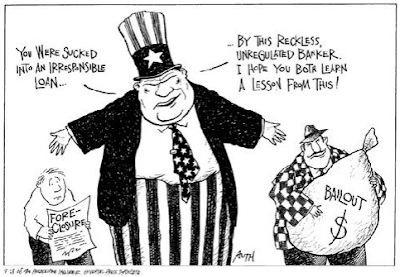 Posted by Invisible Man at 7:17 AM