Is Barack Obama's "Personal" Take on Race in U.S, As Black President or as The Head Waiter for The American Empire of White Supremacy? 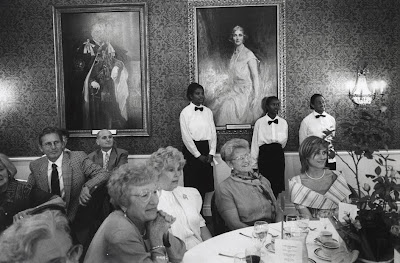 I’m not sure if President Obama, who’s been at best "MIA" from Black America since he was elected, made his "unprecedented" remarks about race, to assuage Black people-still reeling from the Trayvon Martin verdict- or, to reassure white liberal America- who because of the verdict- for the first time had to directly confront the elaborately sophisticated, mostly stealth, and always updating mechanisms of white supremacy, that continuously benefits them as a group.

In his speech President Obama situated himself as a victim of race, when as a candidate for U.S. Senate, he was mistaken for a waiter at an exclusive party in New York.  But what he's really doing is mitigating the true oppressiveness of American White Supremacy on Black males, as if the U.S. Presidency is just as much in the possible trajectory for Black males as winding up in jail, or dead on the side walk like Trayvon Martin.

What's ironic about President Obama's "waiter" comment isn't just that he has allowed the predatory international bankers and corporations to continuously loot the American economy, thereby creating only service sector jobs like waiters and waitresses. But also the fact that President Obama ran and won the Presidency as a progressive change agent, but in fact turned out to be a "caretaker president" or "servant" for the continuation of The American Empire of White Supremacy. In fact I think it's accurate to view President Obama's presidency as a " head waiter" taking the dwindling resources from America's kitchen and serving them to the 2 percent elite.